At 6’ 5” and 230 pounds, most coaches would love to have 16-year-old Maks Pierga on their team. In fact, while growing up in Barrington, IL, he made coaches in many sports happy: soccer, lacrosse, basketball, and baseball. He enjoyed them all and developed great friendships.

“I’ve been playing baseball now for about 10 years,” Maks explains. “I just developed a real love for the game and decided to specialize in one sport.”

He joined both a travel team and the Barrington High School baseball team as a pitcher and first baseman. With back-to-back seasons, that meant playing or training ten months of the year. He developed a 90-mph pitch, which meant that playing D1 baseball in a couple years — and maybe the pros — became an attainable dream for this high school sophomore.

Pain got in the way

What he did not dream about was a knee condition sidelining him.

Starting at age 10, Maks had pain in his right knee. He figured a few aches and pains were just the cost of playing sports. “I actually thought it was due to growing pains,” Maks’ mom Ania explains. “We became worried, so we took Maks to a doctor who diagnosed him with osteochondritis dissecans, which of course we had never heard of.”

The physician explained that osteochondritis dissecans is a condition that develops in joints, most often in children and adolescents. It occurs when a small segment of bone begins to separate from its surrounding region due to a lack of blood supply. The small piece of bone and the cartilage covering it begin to crack and loosen.

Maks’ doctor recommended that he rest which seemed to help. That is until he resumed sports and the pain returned.

Fast forward several years to a travel baseball game in the summer of 2020. “Watching from the bleachers, I noticed that he was running like a pregnant lady,” Ania half-jokes. “We knew then that we had to take this seriously and get him relief from the pain.”

The Pierga family researched sports medicine surgeons and were impressed with what they learned about Dr. Brian Cole of Midwest Orthopaedics at Rush (MOR). During a visit, Dr. Cole recommended surgery to treat Maks’ knee pain followed by a course of physical therapy and training at the MOR Sports Performance Center to maximize his conditioning for the next baseball season. The family agreed and Maks underwent successful surgery.

Following eight weeks using crutches and undergoing physical therapy, followed by five weeks of physical therapy alone, he was ready to further address any deficits that living with pain and recovery from surgery may have created.

He was introduced to Dave Heidloff and Sean McNeil, two certified athletic trainers at the MOR Sports Performance Center. They performed a Lower Body Assessment on Maks which identified his unique needs. They then worked with him on core strengthening, removing compensations, and improved joint control from head to toe. They also recommended a Running Assessment which Maks completed. With additional information about his running form, the team worked with Maks to improve his acceleration and speed.

“I totally believe that the training with Dave and Sean has made me a better athlete than ever before,” Maks says. “I’m now running a 60-yard dash in 7.4 seconds, down from 8.4.”

“Maks has the natural build to be a really special baseball player,” Dave Heidloff says. “Helping him reduce his risk of injury while getting more speed and power out of his frame has been incredibly rewarding.”

Sean McNeil was impressed with Maks’ work ethic. “Maks has the drive and determination to work hard for his goals,” Sean explains. “We can provide the path for the athlete but if they don't have the positive attitude to do what needs to be done, they're not going to get there. Maks is a testament to setting your goals and going after them.”

Today, Maks incorporates calisthenics and exercises he learned at the MOR Sports Performance Center into his pre-workout regimen.

“We have done so many training programs for my son over the years, but nobody has come close to doing with him what Dave and Sean have,” Ania says. “He is definitely stronger than he was before surgery. We really lucked out finding them.”

To schedule an appointment for an assessment at the MOR Sports Performance Center in Oak Brook, Lincoln Park, or Munster, call 708-492-5630 or schedule a sports performance appointment online.

Hiking Again at 74 Thanks to Sports Performance Center

Since she working with the Sports Performance staff, Kathy Fauth, 74, has increased her strength, bone density, and conditioning. 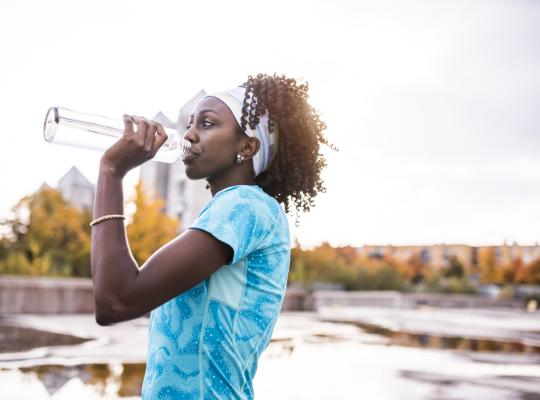 Water is essential for our overall health and is key for performing certain body functions.

Training for a Marathon: How to Avoid Injury