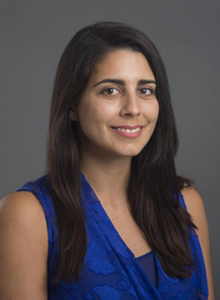 Antonia Zaferiou, Ph.D., has joined Midwest Orthopaedics at Rush as the Director of Motion Analysis for the Division of Sports Medicine. In this role, she will oversee orthopedic and sports medicine research in the Motion Analysis Lab.

"In 2015, she earned her Doctor of Philosophy from the Department of Biomedical Engineering at the University of Southern California (USC). During her studies in the USC Biomechanics Research Lab, she investigated the multi-joint control and dynamics of well-practiced and goal-directed movements, such as the golf swing and dance turns. Prior to joining Rush, Dr. Zaferiou was a postdoctoral fellow at University of Michigan, where she created algorithms that automatically analyze athletic performance using wearable sensors. She has also conducted biomechanics research at the VA of Greater Los Angeles; Hospital for Special Surgery, New York; and New York University’s Hospital for Joint Diseases,” according to a recent press release.

"During the next few months, we will be launching studies focused on understanding shoulder stability during activities of daily living post-Latarjet surgery. We will also be examining elbow loading patterns, the role of each leg during baseball batting, and the mechanics behind volleyball hitting.”