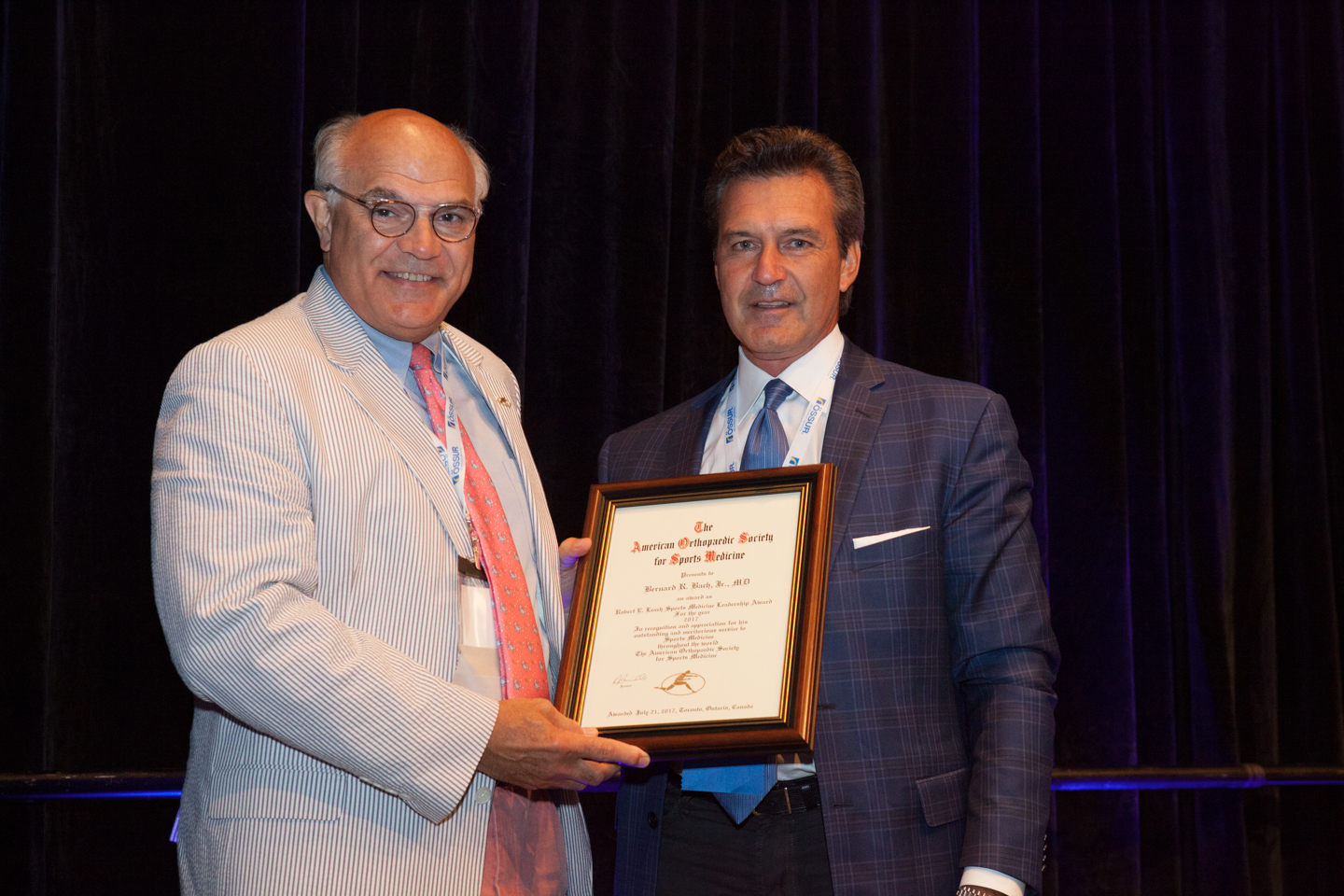 Bernard R. Bach, Jr., MD, orthopaedic surgeon at Midwest Orthopaedics at Rush in Chicago, IL and Past President of the American Orthopaedic Society of Sports Medicine (AOSSM), received the 2017 Robert E. Leach Sports Medicine Leadership award on Friday, July 21, 2017 during the AOSSM Annual Meeting in Toronto, Canada. This prestigious award is given annually to honor those who have made a significant contribution to the world of sports medicine and includes a
$5,000 donation to the winner’s charity of choice. It is one of the top awards the Society presents each year. Dr. Bach is the 44th recipient of this distinguished award.

Dr. Bach received his undergraduate degree from Harvard University, Cambridge, MA, where he also played intercollegiate football and baseball. He attended the University of Cincinnati (Ohio) College of Medicine and completed his residency at Massachusetts General Hospital, Boston. He then went on to complete a sports medicine fellowship at the Hospital for Special Surgery, New York.

In 1986, he pioneered the sports medicine program for Midwest Orthopaedics at Rush (MOR), which today is one of the nation's most well-respected programs. He held the position of Director of the Division of Sports Medicine for 30 years and was the Sports Medicine Fellowship Director for 28 years. Dr. Bach is currently The Claude N. Lambert, MD and Helen S. Thomson Endowed Chair of Orthopedic Surgery, and professor of orthopaedic surgery at Rush University Medical Center where he maintains an active practice. He also serves as a team physician for the Chicago White Sox and the Chicago Bulls.

Dr. Bach serves on numerous national sports committees and editorial boards and is an educator and mentor for residents and fellows at Rush University. He has been president for several organizations, including the Quigley and Herodicus societies. He also served on boards for the Illinois Special Olympics and the Orthopaedic Research and Education Foundation. He has authored more than 600 scientific papers, abstracts and book chapters and served as the editor for the Journal of Knee Surgery. He is also on the editorial board for Orthopaedics Today.

He has been repeatedly honored as one of Chicago Magazine's "Top Doctors." In 1995, he was inducted into
the Illinois Athletic Trainer's "Hall of Fame."