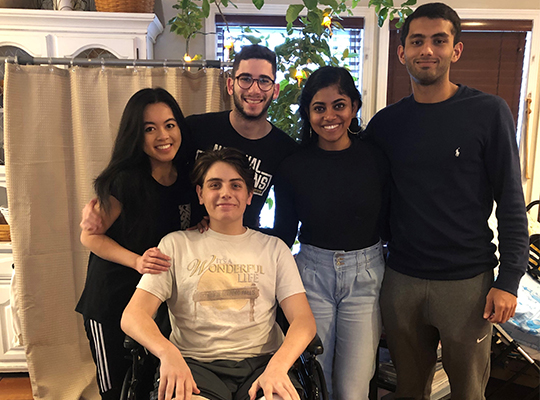 Izzy Nottolini, 21, a biomedical science student at the University of Central Florida, was thrilled to find cheap flights for a last-minute ski trip to Colorado with friends late last year. “It seemed like a fun thing to do after finals were over,” he explains.

Upon arrival, Nottolini grabbed skis and immediately went out for his second time ever on skis. “I was doing really well all day and then headed up the mountain for my last run,” he says. “I do have a tendency to go fast.”

It was during that last run that he saw one of his friends fall. He tried to stop himself to help, but hit a patch of ice, gained more speed, and rammed feet first into a tree. “I was so angry at myself and figured I had probably broken my leg.”

He shouted for help and medics quickly arrived on skis. What they found were two badly damaged legs and a broken femur (thigh bone) protruding from Nottolini’s right leg. They distracted him to prevent him from looking down at his legs, then transported him to the local emergency department. There, they set his leg, attached an external fixator, diagnosed both knees with significant nerve and ligament damage, and performed an arterial graft to treat a blood clot which had formed in his left knee.

Nottolini’s dad Geno jumped in his car and drove to Colorado when he heard what happened. “I was actually in church when I got the call and didn’t believe it,” Geno Nottolini says. “Izzy had to use our code words ‘fun bucket’ before I grasped that it was really him. I was shaking and worried that we were going to lose him.”

Unfortunately, as Nottolini remained in Colorado for continued treatment, the extent of his injuries forced him to undergo an amputation of his left leg just below the knee. Following surgery, he returned to his home in Algonqiun, Illinois with a left leg prosthesis and a determination to focus on rehabbing his right knee which had sustained extensive damage to the ACL, MCL, PCL and PLC.

To continue his progression, he met Dr. Jorge Chahla, a Midwest Orthopaedics at Rush sports medicine physician specially trained in complex knee injuries who was recommended by his surgeon in Colorado. Nottolini and Dr. Chahla clicked right away.

“Dr. Chahla saw the external fixator on my good knee which was preventing me from moving my knee,” Nottolini explains. “He said that we should take a stepped approach and remove the external fixator to focus on developing the best plan for me to rehab – and to return me to a normal gait.”

After arthroscopy to remove scar tissue and bone debris in his knee, together they set small goals. “In order to determine the best path to Izzy’s recovery, I wanted to know what his objectives were,” Dr. Chahla says. Together, they set goal #1:  achieve a 50-degree range of motion within two weeks.

Nottolini worked hard in physical therapy and stayed in close touch with Dr. Chahla along the way. “I encouraged him and continually told him how proud I was of him,” Dr. Chahla says. “We connected over text messages and Izzy and Geno would keep me posted with pictures and videos.”

Nottolini surpassed the first goal and the duo set goal #2: achieve a 90-degree range of motion which he has since exceeded. “Without Dr. Chahla’s help and support, I don’t think I would have made this much progress,” Nottolini says.

“There are lots of doctors with egos but he wasn’t about that. He was intuitive, capable and gave my son superior care. Dr. Chahla was really an answer to prayers.”

Today, Nottolini continues with physical therapy and is working toward two important goals:  recovering a normal gait and going on to medical school after graduation.  “This whole experience really solidified my interest in pursuing medicine after graduation,” Nottolini says.

If you are interested in discussing your knee, shoulder or hip injury with Dr. Jorge Chahla, please call 877-MD-BONES or visit www.rushortho.com.