“Running is my mental everything,” explains marathon runner Gina Uebelhor, 37, of Chicago. “Someday, I want to be one of those sharp ladies you see still running into her 80’s.”

In addition to running into her old age, former figure skater and high school track team member Uebelhor recently set another goal for herself: to run a marathon in all 50 states. So far, she is half-way there, having completed 25 marathons, including Boston, Miami, Chicago, and Minneapolis where she ran her personal best of 3:27. She also finished a marathon in Berlin, Germany.

Her multi-marathon plan had been on track until a couple of years ago when pain in the back of her leg slowed her down. She worried about reaching her goal.

“Pain in my hamstring caused my training to deteriorate and over time, I could only run a half-mile without discomfort,” she explains. “Eventually, it hurt to do any kind of activity or sit for more than a few minutes. I just wasn’t me.” 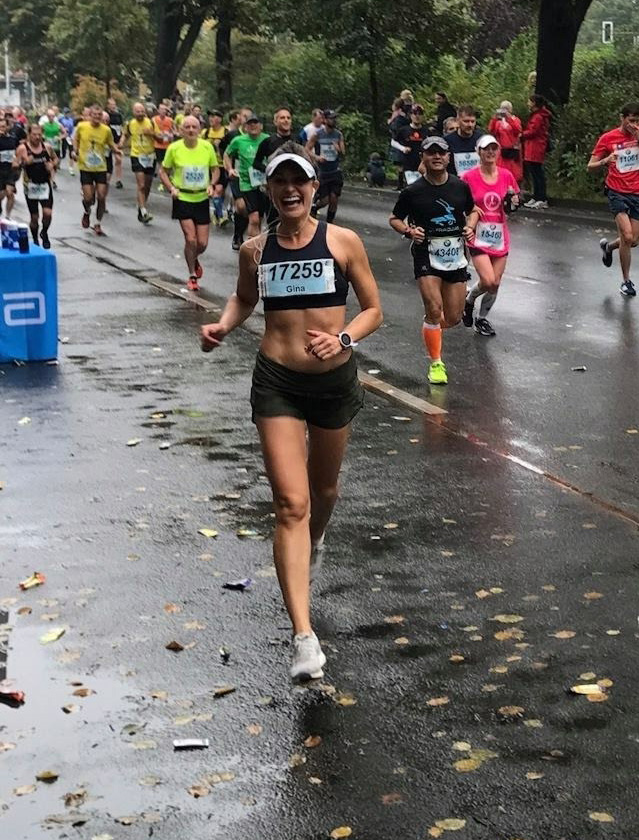 She visited a local orthopedic physician who diagnosed her with a hamstring injury and prescribed a course of physical therapy. When that didn’t help, Uebelhor rested and limited all of her activity. This also proved unsuccessful. Meanwhile, the clock was ticking on her marathon goal and she desperately missed her ability to run. So, she discussed this with her physical therapist who referred her to Shane Nho, MD, MS, sports medicine surgeon at Midwest Orthopaedics at Rush, and a specialist in restoring injured athletes to high-performance levels.

She met with Dr. Nho who explained her surgical options. “By the time I saw Dr. Nho, I didn’t even care what he did. I just wanted to be free from pain.”

Dr. Nho performed a surgical repair of her torn semimembranosus tendon, one of the three hamstring tendons in addition to the semitendinosus and the biceps femoris, which form the attachment of the hamstring muscles to the pelvis. Together, they comprise what is commonly referred to as ‘the hamstring.’

Like a true athlete, Uebelhor was a dedicated patient and committed herself to Dr. Nho’s prescribed regimen of rehab, including physical therapy and a slow return to running. After four months post-surgery, she began walking short distances and at six months post-op, she was running up to six miles at a time.

“I just feel good,” she says. “I’m stronger both mentally and physically and am so glad that I had the surgery with Dr. Nho.”

“It is gratifying to Gina get back to the sport that she loves -- and I look forward to seeing her complete her marathon goals,” says Dr. Nho.

To schedule a visit with Dr. Shane Nho to discuss your lower body sports injury, call 877.MD.BONES or visit www.rushortho.com.