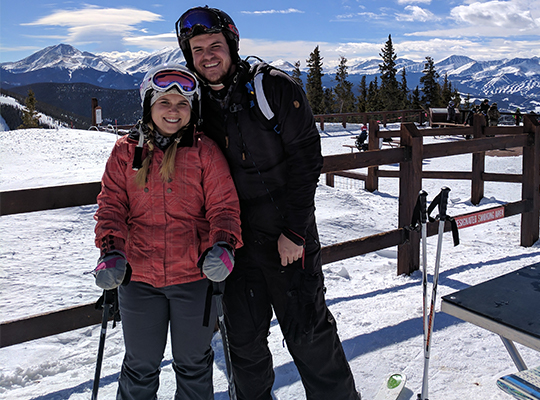 From the instant he heard the familiar-sounding pop in his knee, Brian Bruns knew immediately something was wrong.

After all, the 30-year-old restaurant owner who has been a skier since age seven, had heard the tell-tale noise before. But after tearing the anterior cruciate ligament (ACL) in his right knee last fall—16 years after he tore the ACL in the same knee while skiing – Bruns knew this could be a much bigger issue.

Bruns’ second ACL injury occurred while he was skiing and hiking through rough terrain of a back bowl in Colorado. He leapt and landed back on solid ground when he felt his knee pop and twist.

As a restauranteur who spends 80 hours working each week and walks between 20,000-30,000 steps a day, Bruns admits nearly a year later that if he didn’t have the repair surgery right away, it likely wouldn’t have gotten done for several years.

The excruciating knee pain was causing Bruns’ work performance to suffer. He would tire much quickly than he was accustomed to and he could feel his knee slipping in and out of place. He knew he couldn’t forego surgery any longer.

And, he knew he didn’t have much of a choice.

“I couldn’t give up being on my feet all day,” Bruns said. “I could wear a knee brace to get by, but there was no way I could be out of the restaurant for very long. Either (the surgery would take place) really quickly or I wasn’t going to do it.”

Due to his previous ACL tear, fixing Bruns’ knee a second time was much more complicated and he sought an expert in complex knee injuries. He chose Dr. Adam Yanke, a sports medicine orthopedic surgeon with Midwest Orthopaedics at Rush who is specially trained in treating multiple complex knee conditions in one surgery.

After examining Bruns, Dr. Yanke noticed that in addition to the fact that Bruns’ ACL wasn’t structurally intact after his first surgery, he also had cartilage loss and poor boney alignment. The combination of issues meant Bruns needed reconstruction of his ACL but also a cartilage transplant and osteotomy (a realignment of the bone).

While each patient’s experience with recovery is different, Dr. Yanke says in Bruns’ case, he needed six weeks of recovery with limited weight bearing in order for his knee to begin to heal. Burns did his best to speed up his recovery with limited activity and physical therapy while understanding that there were certain biological dimensions of the healing process for which he’d have to be patient.

In addition to working through a series of knee and leg exercises at home multiple times a day, he visited a physical therapist several times a week. Unlike when he tore his ACL the first time as a teenager, Bruns took the therapy seriously, which accelerated his recovery. Because of the complex nature of his injury, his healing process meant no running and skiing for an extended period of time.

Still, Bruns knows he chose the right doctor and the right procedure, especially given the difference he feels in his knee, leg and back.

“I’ve been able to get back into doing a normal amount of work every day,” he said. “I’m very happy with my decision.”

For an appointment to discuss your knee pain with Dr. Adam Yanke, call 877-MD-BONES or visit www.rushortho.com.