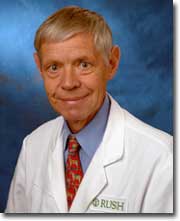 Spine, Back and Neck

"Congratulations on an amazing career at Rush University Medical Center. We thank you for the remarkable contributions you have made to the advancement of orthopedic spine care through your clinical practice and translational research programs. As a consequence of your vision and leadership, Midwest Orthopaedics at Rush and the Orthopedic Surgery Department at Rush have grown and flourished and are widely recognized for their preeminence in clinical care, teaching and research."

In 1985, he moved to the United States and Rush University Medical Center as professor of orthopedic surgery. His clinical area of interest is spine (neck and back), while his research interests are disc degeneration, epidemiology and occupational biomechanics. He just completed a program project on disc degeneration, funded by the National Institutes of Health.

Dr. Andersson is a past president of the Orthopaedic Research Society, the International Society for the Study of the Lumbar Spine and the American Academy of Disability Evaluating Physicians and is currently president-elect and treasurer of the International Society for the Advancement of Spine Surgery. He has been a council member of the National Institutes of Arthritis and Musculoskeletal and Skin Diseases at NIH, chairman of the Research Committee at the American Academy of Orthopaedic Surgeons and a member of three Institute of Medicine committees. He is a fellow of the American Institute for Medical and Biological Engineering.

Dr. Andersson has received many awards and honors. He was the second recipient of the Muybridge Medal from the International Society of Biomechanics and the third recipient of the ISSLS Stryker Spine Lifetime Achievement Award from the International Society for the Study of the Lumbar Spine. He has received the Kappa Delta Award from the AAOS/ORS, the Freedom of Movement Award from the Arthritis Foundation and is a recipient of the Trustee Medal from Rush University Medical Center. He has been named Best Doctor and Chicago Top Physician for more than 10 years. He is a member of 17 editorial boards, editor-in-chief of Spinal News International, a deputy editor for Spine, founding editor ofContemporary Spine Surgery and an associate editor of Clinical Biomechanics. He is the author of over 320 original publications, over 160 books and book chapters and over 530 abstracts.

Dr. Gunnar Andersson was voted among the top 10-15% of Top Doctors in America® by U.S.News & World Report and Castle Connolly. The Top Doctors list is widely regarded as a high-quality reference guide to the medical profession.