Back to Skiing after Fractured Hip 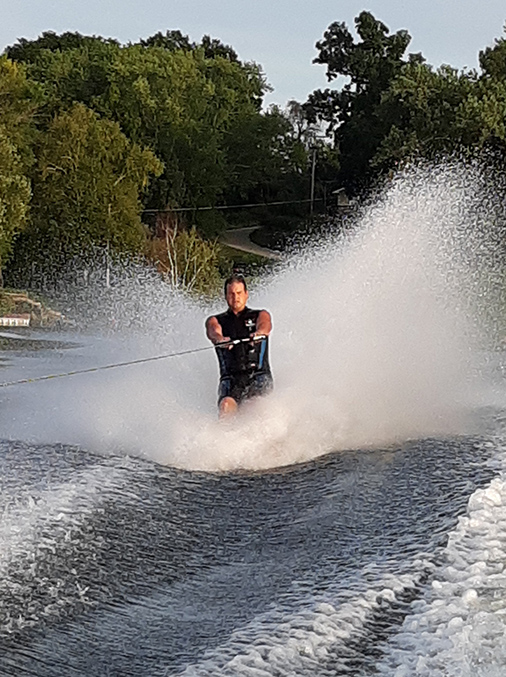 Jason Nicolai, 40, is an avid water skier and active father of two. His summer weekends are typically spent behind a boat, showing off new ski tricks for friends and family. So, when he fell while trick skiing at the family lake house recently, he worried about what this meant for summers to come.

Paramedics took Nicolai to a local hospital where the emergency department doctor diagnosed him with a broken hip. The ER physician told him that there was no question: he needed a new hip. Nicolai and his wife were in complete shock. How could someone who was young, healthy, and thrived on being active return to a normal lifestyle following a hip replacement?

A local trauma doctor gave him another option: pin the hip to see if it would heal that way. The doctor gave Nicolai a 70% chance of full recovery, so Nicolai ran with that percentage. The ensuing surgery seemed to go well, and Nicolai did what he was told and stayed off his feet for 12 weeks.

Unfortunately, after all that time, Nicolai was still in pain. The hip fracture wasn’t healing.

Nicolai and his wife met with a few more doctors to talk about options to alleviate the pain once and for all. Upon advice from friends and family, one of those doctors was Dr. Joel Williams, an experienced trauma and hip specialist at Midwest Orthopedics at Rush.

During the consultation, Dr. Williams spent two hours with the Nicolais explaining the options. The first option discussed was a revision surgery called a valgus intertrochanteric osteotomy which involved a resetting of the hip. The second option was a total hip replacement. After some thought, they decided to go with a hip replacement by Dr. Williams. They immediately trusted him and felt he was the best choice to perform the procedure.

With the operation on the calendar, they went off on a pre-surgery vacation. Meanwhile, back in Chicago, Dr. Williams was methodically going over Nicolai’s images and his surgical plan. After further contemplating Nicolai’s condition, Dr. Williams considered a third option. He suggested forgoing the hip replacement and instead revising the screws from the original surgery.

When Nicolai returned from vacation, Dr. Williams carefully explained his recommendation. Dr. Williams’ confidence and dedication to the case impressed Nicolai and he agreed to the new plan.

Shortly thereafter, Nicolai underwent the surgery and immediately felt a difference. He completed a course of rehab and went back to work, counting down the days until summer when he could visit the lake house again. Even though he knew it was too soon to water ski, he was able to be active in other ways.

Once summer rolled around, Nicolai was in his element out on the water. He was even doing tricks on a ski disk rather than water skis. And, just a few months post-surgery (and one year after his injury), Nicolai was barefoot skiing again—a long way from sitting in the hospital convinced he may never ski again.

The Nicolai family is adamant about one thing—the best decision they ever made was to meet Dr. Williams. Nicolai had already seen an orthopedic traumatologist that recommended a revision fixation surgery, but could not comment on replacement. He had also seen a joint replacement surgeon that recommended a hip replacement, but could not comment on revision surgery options. Dr. Williams’ comprehensive skill set that encompasses all hip conditions including trauma, preservation and replacement allowed for a full conversation about Nicolai’s options. They claim that without Dr. Williams’ dedication to Nicolai’s case and his surgical skills, Nicolai may have been stuck on the couch, simply watching others perform the tricks he used to do.

To discuss your hip pain, or if you are suffering from a traumatic orthopedic injury, call 877-MD-BONES or click here to request an appointment with Dr. Joel Williams