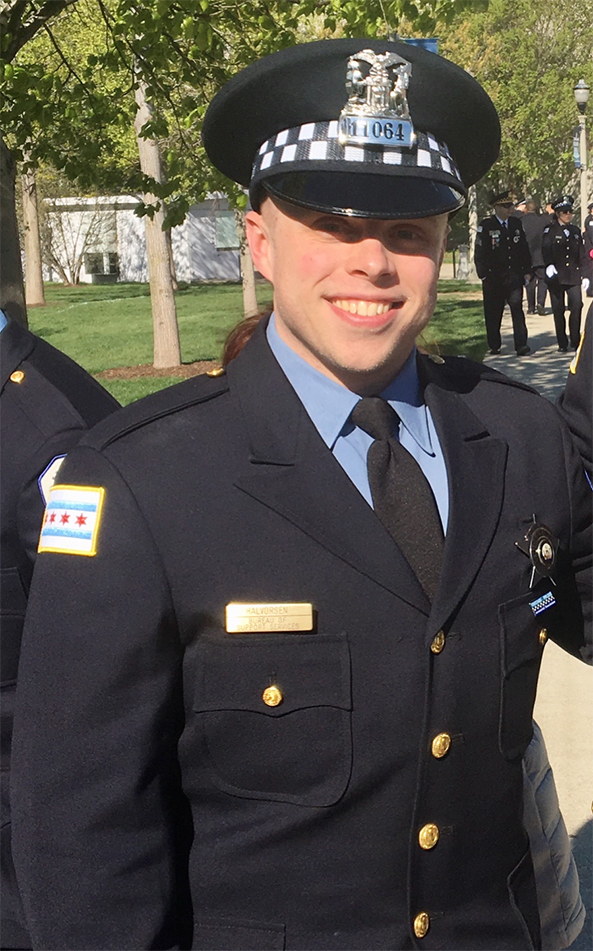 Early one summer morning in 2018, then 26-year-old Chicago Police Officer Ryan Halvorsen was riding his motorcycle home after a shift on Chicago’s west side. He was traveling on Sacramento Avenue in Chicago when he was struck by a car, changing the course of the next year of his life.

“After I came to a stop, the first thing I thought was ‘am I paralyzed?’” Halvorsen said. “I was able to wiggle my toes but couldn’t feel my leg or look down for fear of what I would see.”

He was rushed to Stroger Cook County hospital where doctors identified the extent of his injuries. Halvorsen’s tibia (shin bone) was broken and protruding from the skin. His femur (thigh bone) was also completely broken, and his hip was dislocated and fractured.

Once stabilized, Halvorsen developed other complications, including blood clots in his lungs and damage to his intestines. He was placed on a ventilator and in an induced coma for a week. At this point, his limb and his life were both in jeopardy.

Later, friends told him that hundreds of sergeants and officers visited him at the hospital during that time. His parents and girlfriend stayed by his side.

Once Halvorsen was taken off the ventilator and his health improved, doctors were able to perform surgeries to remove a portion of his intestines and fix his fractures. Halvorsen had an outstanding orthopedic team which first fixed his tibia and femur fractures.  His hip injury included a complicated femoral head fracture-dislocation that was treated by Dr. Joel Williams, an orthopedic trauma and hip specialist at Midwest Orthopaedics at Rush.

Halvorsen’s hip injury was treated using a specialized technique that is primarily used for hip preservation procedures.  Having a hip specialist like Dr. Williams, who has a unique hip skill set that included trauma, preservation and reconstruction, was crucial to Halvorsen’s excellent outcome.

The surgery lasted approximately 3-4 hours and successfully positioned Halvorsen for a one-year rehabilitation program and a goal to return to work. His surgeries allowed him to complete his physical therapy milestones.

Back to serving the residents of Chicago

At the one-year mark, he returned as a member of the Chicago Police Department tactical team.  Today, he is mostly pain-free and is building back up his ability to run. He admits, “I’m glad to be back at work but my days of chasing people down is probably over.”

“After my surgery with Dr. Williams, I just wanted to be able to move fast enough to help someone who needed it,” Halvorsen explained. “I knew I would eventually get there with his help and my determination to work toward that goal.”

To schedule an appointment with Dr. Joel Williams, call 877.MD.BONES or visit www.rushortho.com.